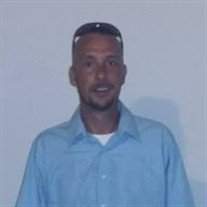 Anthony "Andy" Paul Adkins, 37, of Pipestem went home to be with the Lord, June 20, 2016. Born March 21, 1979 at Hinton Hospital he was the son of Dora Leigh Adkins Faris of Pipestem and Dale Allen Bryant of Hinton.

Andy loved spending time with his boys playing basketball, fishing, hunting, and whatever else the boys wanted to do. He loved every second of being their daddy. Andy excelled in high school basketball at Pipestem Christian Academy helping win back to back state titles. He also loved his cars and riding motorcycles. Andy loved the Lord and would do anything to help anyone at anytime. God never gave anyone a better heart or kinder soul then what was inside of Andy. He loved his Momma, his kids, his PawPaw, and brothers and sisters unconditionally. He loved his family and friends, worked hard, and will be deeply missed by everyone.

Preceded in death by his biological father Dale Allen Bryant of Hinton; his grandmothers Anges Anita Adkins of Pipestem and Edna Elizabeth Faris of Bozoo and a sister Salena Ann McBride of Pipestem.

Memorial services will be held Saturday June 25, 2016 at 1:30 P.M. at the Cooks Chapel Baptist Church with Pastor Dallas Peyton officiating. Friends may visit with the family from noon until time of services at the church on Saturday.

In lieu of flowers, donations of sympathy may be made to Ronald Meadows Funeral Parlors to help cover cost of services.

To send flowers to the family in memory of Anthony Adkins, please visit our flower store.