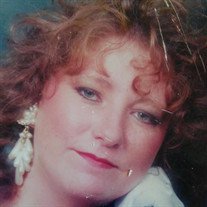 Angela Buckland, 45, of Hinton went to be with the Lord Friday, February 24, 2017 at Bowers Hospice House following a short battle with cancer.
Born November 16, 1971 at Fairfax, VA she was a daughter of Earl and Emmy Jeffries Buckland of Pence Springs.
Angie was of the Baptist faith. She lived most of her life in Summers County. Angie enjoyed outdoors, camping, fishing, spending time with family and friends and watching her grandchildren play in sporting events.
Besides her parents those left to cherish her memory include one son, Corey Holland and wife Allison of Wayside; one daughter, Samantha Holland of Talcott; two grandsons, Colton and Camber Holland of Wayside; one brother Earl Buckland Jr. of Hinton; two sisters, Cindy Buckland and Cheryl Buckland both of Hinton and several nieces, nephews and cousins.
At Angie's request there will be no services and the Ronald Meadows Funeral Parlors is entrusted with arrangements.

Condolences may be sent to the family at www.ronaldmeadowsfp.com
To send flowers to the family in memory of Angela Buckland, please visit our flower store.