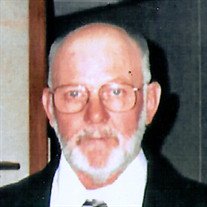 Adolphus Gene "Jinky" Ward, 69, of Hinton went home to be with the Lord, Saturday, March 3, 2018 at the Summers County Appalachian Regional Hospital following a courageous battle with cancer.
Born January 1, 1949 at Hinton he was a son of the late Albert Lee and Pauline Francis Ward.
Gene was retired from the Army National Guard, 1 Howitzer Battery First Squadron 150th Armored Cavalry as Sgt. First Class with 20 years of service. He was a member of the International Brotherhood of Electrical Workers Local #70 in Washington, D.C. and worked on various projects with NOVEC and Dominion Power. Following retirement he enjoyed gardening, hunting, fishing, splitting wood, driving his jeep, and helping others in any way that he could. Gene was the last surviving member of his immediate family.
He is preceded in death by four brothers; Albert Wayne, Ronald Edward, Richard Dale, and Russell Dean Ward.
Those left to cherish his memory include his wife of eleven years, Barbara Ann Sears Ward at home; two sons, James D. and Russell Lee Ward both of Hinton; one stepson, Kenneth Dale Ward and wife Jessie of Hix; six grandchildren, Kaylee, Steven, Brian, Josh, Megan and Justin; two great grandchildren, Kenzie and Cayden; and his best friend, Jackie Adkins of Hinton.
Funeral services will be 6:00 P.M. Wednesday, March 7, 2018 at the Riverview Chapel in Hinton with Pastor Scott Ross officiating. Visitation will be from 5:00 P.M. until time of services Wednesday at the Riverview Chapel in Hinton. Family and friends will serve as pallbearers.

To send flowers to the family in memory of Adolphus Ward, please visit our flower store.